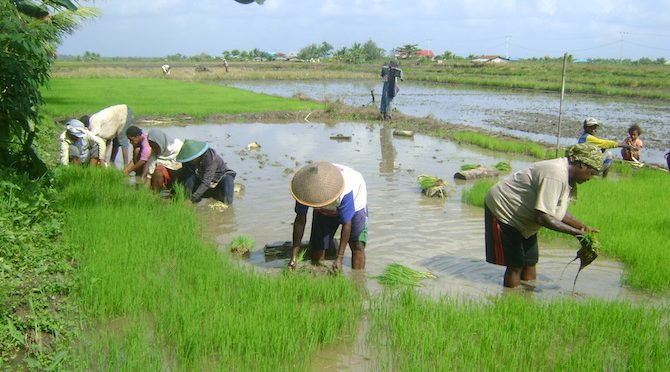 If there is one thing that well-off people take for granted, it has to be the ability the see clearly. In Indonesia that visibility is challenged, overwhelmed, and mercilessly beaten.  For some the prospect of working in low levels of darkness is simply an everyday challenge.  Electricity is not well distributed in farms and villages. Many people work in their fields and paddies under the shadow of night.

There are dangers to working in low light, or half-light. There are holes to fall down, potholes in roads, and many uneven pathways and roads that have been carved into the landscape, neither flat nor firm, but instead representative of something more akin to an obstacle course.

For those in need of more income, working through the night can give the chance to earn a tiny bit more money. For some it is the means to buy food, whilst for many it just means being able to exist. In rural areas and in villages, there are few who can afford prescription glasses. It is estimated that more than a quarter of all Indonesians are in need of glasses to see clearly.

Spare a thought then for those who live in no light at all. In Indonesia there are more than 3.5 million blind people.  What opportunities are available for the blind and the acutely vision-impaired?  Orang Buta can be found everywhere. If they are lucky enough they can be helped by their family. Led by the hands of children, and allowed to sleep under a roof at night, and under shelter from the rain.

However, many blind Indonesians live alone or segregated in groups of blind people.  Families know the risk of caring for the blind. Another mouth to feed, another sick soul to care for. Where poverty is at its cruellest, one can always find the blind.  Empathy stands aside, and the blind are separated, segregated, and seen as a burden to the rest of society. Only those young blind folk from wealthy families get to attend school. The rest are often left to fend for themselves. Many do not survive.

Micro finance is often directed at the able bodied people, or at least to those with the clearer prospect of starting a small venture, and obtaining some small measure of independence and financial resilience. Microcredit often falls short of helping those in poverty but who cannot see.  The value of no-interest micro finance is that it can be channelled in any direction. It does not seek to favour the healthy, but rather it is purpose built to lift up those in need.

Some of the best micro finance programs have helped the blind in projects such as weaving, vegetable growing, and mushroom farms. For many it is the chance to use their hands and to add value to raw materials and basic produce. In Jakarta there are blind people in print shops, in Balikpapan there are blind fishermen, and in the hills of Malang there are blind people turning apples into Dodol (apple toffee). Micro finance finds opportunities in the strangest places.

David Cook is an Indonesianist, a technologist and an academic interested in poverty, social justice, CSR and Human Computer Interaction. He is a Director of Bamboo Micro Credit.strangest placesstrangest places