Two Steps Forward … One Step Back 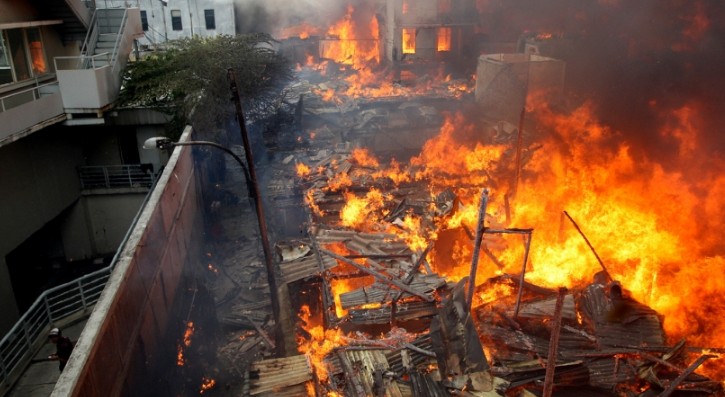 The nature of micro finance is that each borrower is fragile. They often lack the financial stability to change their circumstances for the better. The aim of micro borrowing is establish the additional help to make a change. The amounts are deliberately small so that individuals and fragile small families can introduce a transformation that will generate a better financial, social, or health outcome.
In the context of creating upwards change, the use of micro-loans seems well placed, sufficiently gentle, and effectively attainable. However, sometimes there are bigger forces at play. Acts and fluctuations that can emerge that are beyond the control of anyone, let alone those who survive close to the poverty line.
In Indonesia the poorest of folk can often demonstrate their resolve and their tenacity in the face of overwhelming difficulties. In May 2016, one of Malang’s best known market places suffered a large fire. Known as the Pasar Besar, this market was a ‘must see’ market for both locals and visitors to the city of Malang. It included an enormous range of pop up stalls, food and drink, goods for sale, and services aimed at the repair and mending all manner of items. The impact of the fire was unkind to some, and fairer to others. More than a dozen of Bamboo’s micro borrowers were affected. The fire tore through large parts of the upper levels of the multi-storey market block. Stallholders on the outside and at the fringes were spared from too much damage. Those in the inner parts were dealt the unkindness of total destruction.
For some it meant that their location in the market was gone, and that they needed to find a new place to sell their snack foods, or their drinks, or their magazines. For others, their opportunity was turned upside down. Micro-lending is commonly used to provide money to buy stock. In the case of the fire at the Pasar Besar, several Bamboo borrowers lost their entire business venture. No stall, no customers, and nothing the sell.
For those of us in developed economies, there are safety nets, payouts, insurance claims, and a range of services designed to get us back on our feet. In Indonesia, most of that protection simply does not exist. Without unemployment benefits, some small business owners are worse off than before. Without the stock or the customers to sell to, they are left with no money, little prospect, and they are stuck with a financial debt. In the business of lending, no bank ever wants to talk about writing off a debt. However, sometimes the best type of debt is the one that is forgiven. Taking risks (albeit calculated ones) means accepted the challenge of poverty alleviation. For Bamboo Micro Credit, the distinction between micro-lending and charity is an important one. Giving money to poor people is not helpful when compared to providing funds that enable a family to help themselves. An interest free loan can make all the difference to a family trying to lift itself out of subsistence. Such loans are not designed to create millionaires, but they are intended to provide opportunity in the face of greed and discrimination.
Even those businesses that start and fail are known to generate valuable experiences. The lessons learned, the knowledge gained, and the practice of endeavouring to make a change, are all useful elements in the journey to alleviating poverty. Micro-lending groups such as Bamboo Micro Credit offer small scale, interest free loans specifically to help lift people out of poverty and to make them seek out their own self-sufficiencies. It’s not always perfect, and the path to greater strength and stability is sometimes cruel and inconsistent. Two steps forward … one step back.

Bamboo Micro Credit:
It’s not a handout … It’s a hand up